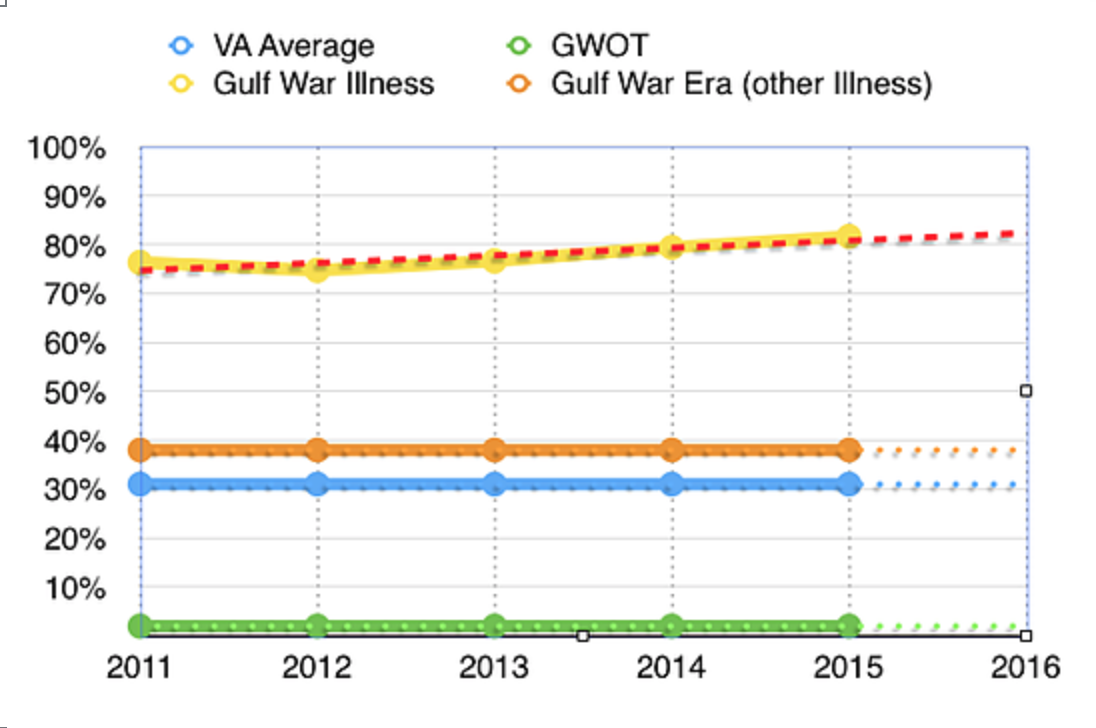 It is especially noteworthy to recognize the historical denial rates for service connection are between 30% & 40%.  Some estimate that 60% of those denials are later found to be erroneous. We are going to look into how that compares to other injuries and eras of Veterans.

Since 2011, denial rates for service-connected claims related to Gulf War Illness climbed from 76% to near 82%.  Remember, historical denial rates for all applications hovers between 30% ~ 40%!  Denials of claims for exposure to the Middle East is 2x the average of all other claims.  And depending on the year, denials for these claims can be almost three times the average rejection rate.

We can take this one step further if you’re saying…

“But I saw Gulf War Illness on the X-Files once, so maybe it’s not so cut and dry as the VA is goofing this up at the expense of Veterans who don’t have data and a clear understanding of the process on their side.”

First of all, we just happen to have a control population of 2 million Veterans that had exposure to the same region and hazards.  That control population we can contrast is the Global War on Terror generation of Veterans (GWOT).  Over 1 million unique service-connected compensation claims were filed by this generation of Veterans, so far.  The denial rate is for these claims is 2%!

2% is such an extreme that it deserves another closer look.  We should probably look further into this number at some point in the future.   So, let’s look at this average, taking away the 98% approval rate.  And for the sake of argument, let’s also take away the 81% denial rate on the Gulf War Illness issue. If we normalize this data, it shows us that Gulf War Veterans’ claims are denied 25% more often than the average VA claim!

In conclusion, what’s the recourse?  Education and discussion.  Keep this discussion alive and relevant.  Share this information with friends and Veterans. And educate them on their options.

And please remember, get your claim take care of if you have experienced any of the issues associated with service in the Middle East and Afghanistan.